In the early days - and still today - it was a tradition to send the Weddingguests after the Wedding a card saying: Thanks for the Flowers, Gifts etc.
Now you have the opportunity to say "Thank You" in an entirely different way.

The giving of Bomboniera (or confetti) goes back to the 16th century.
At the time of King Louis XIV (1643-1715), the royal servants had tabacco-powder in these boxes. Because the King was allergic to this powder, he forbid this custom completely.
One day one of his servants was caught carrying such a box with him. To escape punishment, he told the King he was carrying sweets in this box. Naïv as the King was, he believed him, and since then the servants carried 2 boxes, one with sweets, and one with tabacco-powder. And that`s the origin of the Bomboniera ("Thank-You`s"), and it`s tradition.

In many parts of Europe it became a tradition to give such boxes (Bomboniera) at Weddings and Births, mostly made of Gold, Silver or Chrystal, decorated with precious gems or other material.
The most well-known one is the one Tsar Paul I became for his Birth,, which still can be seen today in the Museum "L`Hermitage" in Leningrad.

This nice tradition of the `noble` people, was taken over by the `simple` people in the 19th Century. The poor people used Cardboard boxes, Porcelain or other material. From Tulle they made little bags and filled them with Almonds. At first, just parents and family got these "Thank-You`s",, later on also other relatives and friends.

The contents of these "Thank-You`s" as described before, are sugar-coated almonds.
I`d like to tell you something about that too. Therefore, we go back in time once more, to Greece in the 10th Century. People would eat Nuts, Seeds, and Dried Fruits as desert for a good digestion.
In the 16/17th Century other Seeds and Fruits got more popular, for instance Almonds and Pistachio`s.
Bakeries and Pharmacists got into fights whether almonds were a medicine or a sweet. Anyway, de bakeries made their own decisions, because almonds (coated in sugar) tasted better.

Because sugared-coated almonds were at first very expensive, only the `noble` people could buy them, much later, when they became cheaper, the poor could also afford them. And thus, in time, everybody could afford, not just the Almonds, but also the Bomboniera ("Thank-You`s").

Whether for Birth`s, Communion, Weddings or Jubilee, this nice Tradition is very alive today. Our excuisite collection adds a touch of elegance to your Wedding Reception. Don`t just Thank your guests,,, make them Remember the Sweetness of your Wedding-day.
Give them a lasting gift, to express your thanks.

Take a look at my beautiful "Thank-You`s". 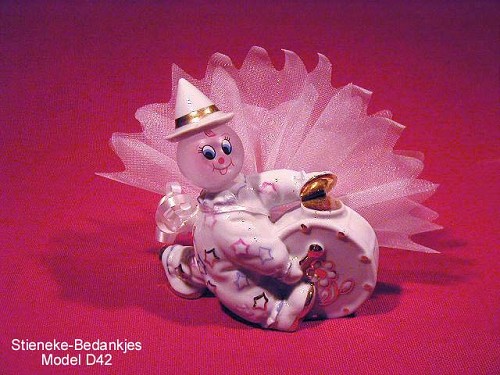